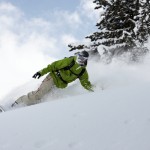 Looking to step up your game this season on the mountain?

Most beginner to intermediate snowboarders spend the first couple of days of each season regaining both the skill and strength back that they lost during the spring and summer months. With snowboarding specific training programs, you can not only speed up the relearning process but also dramatically improve your boarding. A more conditioned body generates more strength for launching off kickers, endurance for long powder runs, pillar strength for rotational movements, as well as improved balance and coordination.

The foundation of every snowboard specific training session is a combination of core and leg movements. Little upper body lifting translates into performance on the mountain, but the core is used continuously from the peak back down to the lift line. A beginner needs to activate the core to carve deep sweeping turns, while an advanced boarder needs the core strength to generate massive amounts of rotational power for mid-air spins.

You’ll need both explosive strength and muscular endurance in your lower body, making leg strength the next most important aspect of your snowboard training program. Training for strength and power allows you to launch off jumps and make quick aggressive turns, while the endurance will allow you to battle even the deepest powder runs without fatiguing.

To add cardiovascular conditioning into the workout perform the leg and core movements in a large circuit alternating between the two until all exercises have been performed. Rest for 2 minutes in between rounds, and perform a total of 3 sets. Make the plyometric exercises their own circuit by performing 45 seconds of each movement followed by 15 seconds of rest before moving on to the next.

For more information on properly performing these exercises visit our Video library.